I visited Ukraine in September 2015 as an artist attached to a cultural managers exchange between Beat Carnival (Belfast) and Izolyatsia (Ukraine).

I spent most time in a coastal city called Mariupol in the South East of the country. It is close to the border with Russia and lies in the land corridor that connects Russia with the Crimean Peninsula. The ties between the people of those countries living in this region are deep and long held.

The war that started late in 2013 has had a devastating effect on the country and much of the eastern region, specifically focused on the regional capital of Donetsk remains under control of Russia-backed rebels, the DPR. Mariupol remains under the control of the Ukrainian authorities and a ceasefire is currently in force. It is estimated generally that around 8000 lives have been lost in the Ukrainian conflict in under two years, some estimates go much higher.

We had a couple of hours to explore Maidan Square in Kiev, the people’s central gathering place and encampment where the conflict started, much as we might have seen during the ‘Arab Spring’ in the years before. Although the numbers of people killed during the Maidan part of the fighting was small relative to the overall scale of casualties, their impact and impetus is felt to this day through the many makeshift memorials that have spring up where people were killed.

Whilst we read the narrative of lit candles, national colours and faded flowers, the Maidan punctum for me were in the miners’ helmets and the shields used by the protesters. There were manufactured aluminium shoelds with neat lines of holes at the top, some fabricated from heavy steel plate bearing leather holding straps and then there were those that were hastily created from chipboard kitchen cupboards and bent plumbing pipe.

These last kitchen-table shields have created an image in my mind from which scenarios flow, I imagine hammer-flattened shower rod, pairs of pliers, nuts and bolts of various sizes scavenged from toolboxes, the frustration of blunt drill bits, the marking out of the angle to make the handle, the sense of invincibility on first lifting it, the rush of blood from getting involved because it matters, of doing something, standing up. I picture the miner’s helmet being lifted and the determination on setting out to join with the people. 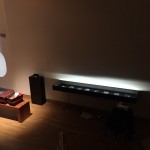