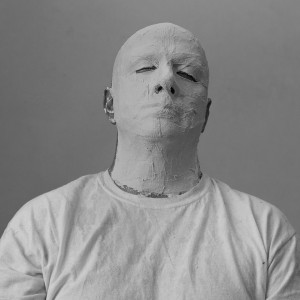 Too Old To Emerge?

We live in a time where there is no such thing as a job for life and having multiple careers over an individual’s working lifetime is fast becoming the new paradigm. I am such an individual*.

In 2013 I embarked on a new chapter in my life by enrolling on a Master of Fine Art (MFA) course at the Belfast School of Art. My aim was to build upon my lifelong artistic leanings and my previous arts practice in sound, media and public art. I and my cohort of fellow students went through the MFA process together, practice reflection, critique, art theory, the philosophical and the practical. We stood in each other’s critique sessions, supported each other after challenging reviews and sought to develop our individual practices in that hothouse environment of ideas and freedom to think. I was awarded the MFA with Distinction and graduated in Summer 2015. It’s one of the most enriching things I have ever done.

I paid the same fees to the University as everyone else, the teaching that I received and tutorials sought were the same, our classes were no different, rooms, corridors and spaces that we inhabited as a cohort were identical. Fellow students at the university were Men and Women, Gay and straight, Christian, Muslim, Atheist, British, Irish, foreign, people of all abilities, colours and extractions. Everyone was treated the same. This is as I would expect to see in any progressive and modern institution: reaping the benefits of generations of equality and human rights struggles.

As a white male from a western middle class background, I have been privileged in this world. I was sheltered from the worst of ‘the troubles’, but like everyone else living in Northern Ireland, I have experiences to relate. Having lived through that turbulent conflict period, the reverberations continue to shape my contemporary self and are frequent themes in my art practice. Outside of the Northern Ireland tribal particulars, I have never really encountered discrimination as a victim.

In the past couple of years however, I have realised that I am receiving differential treatment that, on the surface anyway, seems to be based on an arbitrary factor.

There are two key fact areas:

There is of course an element of generalisation in fact 2 above.  I’m usually considered too old to be an Emerging Artist.

Where is my evidence you ask?  Well, it’s on every college noticeboard, it’s in almost every ‘competition’ email circulated to students by professors, its in emails from my artist community, it’s on my facebook newsfeed…. Competitions and opportunities for  Student and / or  Emerging artists, check the age limits.

Initially I was slightly bemused, but over the 2 years of study and time since graduation, it became abundantly clear that these were not unique events, and that I and many of my fellow emerging artists are being systemically denied the same opportunity as my peers.

I am being discriminated against because of my age. There, I said it!

There certainly seems to be a threshold at age 25 and a hard cut at 30. Even the Turner Prize writes me off at 50, not that I would have any chance of being nominated never mind winning… Why is that?

Eleanor Turney writes in the Guardian Article “Young, emerging or ready? For early career artists, it’s all in the labelling”

“Young’ emphasises our fetishisation of youth and precocity.”

“Peter de Haan, chairman of IdeasTap spells it out clearly enough: “If you look at the unemployment stats, it’s clearly young people, especially aged 16-25, who are in the most need of support. My experience as a philanthropist has taught me that if you want to make a real difference you need to focus that support.”

Stephen Fewell, chair of JMK Trust (which bestows the £25,000 JMK Young Directors’ Award, available to under-30s) also says: “In the current financial climate, looking at the employment prospects for young people leaving education, I lose no sleep over youth being an appropriate criterion for support.”

However, de Haan explains that although IdeasTap initially focused on 16-25 year-olds, “we saw a big increase in members aged 25-30 who needed support to kick off their careers”. John Garfield-Roberts, an actor/director, worries that graduates of schemes for young artists find themselves “at the bottom of a very big pile, with little or no support to guide them through the next stage of their career”. 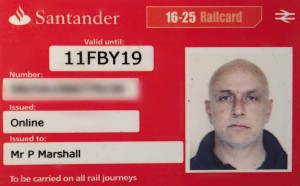 And what about trying to define emerging?

“Emerging artist” is a popular catchphrase used to excite the attention of onlookers, but it is one that can apply to artists at varying stages of their careers.”

He was doing so well, but then…

“Of course there is nothing to prevent a young artist bypassing conventional routes and going it alone; posting images on a website or Instagram, or just finding somewhere to show.”

“For myriad reasons (family pressure, the need to pay the rent, changing interests) many people don’t get their first job in the arts until they’re older. They are then competing with younger graduates and those who can afford to take up internships, but are ineligible for some streams of support, including ACE’s Creative Employment Programme and some of the opportunities offered by another big supporter of young people in the arts, IdeasTap”.

What we have are two conceptually different ideas frequently being conflated into one: that only young people are valid students. Clearly, it is understood by me that there is an 18-25 support imperative, but if the intention is support for early career artists, or philanthropy, then age limits aimed at young people miss a significant minority of artists who arrive late, or are returners. I believe that rules-makers inadvertently create a value differential that means older emergents and their creative output are effectively deemed less worthy than that of someone who is sub 25.  An unfortunate structural discrimination

In no way am I saying that the organisers of competitions and awards set out to discriminate; their intention is the opposite, to support and to focus energy and resources where it is needed. It IS needed by the young artists, there is no question as to their right to compete but the same needs exist elsewhere in the same cohort.

Supporting student and emerging professional emerging artists is critical at a stage in their career when small interventions and a little exposure can bring significant benefits. It’s a first-world problem I know, yet in many cases like my own, the practice of a mature emergent artist is supporting a family reeling from recession and austerity that took away decades of work not to mention any hope of a pension. Now I take work where I can get it, it’s tough to develop a creative practice when all your focus is on meeting the monthly bills for the household. It’s already beyond tough to survive, why not rub some salt in there too

I believe that there are benefits for award sponsors that arise from genuinely reconsidering how they achieve maximum impact for their support. If you are connected with this kind of creative support endeavour, thank you for not forgetting me and those like me who are assumed to be at best uncool, at worst, on the scrap heap. Don’t give up on us, we aren’t dead yet!

On behalf of old [F]artists everywhere, thanks for listening. I feel better already!

[…]
If you are a creative professional living in the UK & Ireland and aged 18-30, we cannot encourage you enough to apply for this scheme. There are very few opportunities like this in the world for people looking to make a sustainable break into the creative industries.[…]

I asked a question as to why this was. 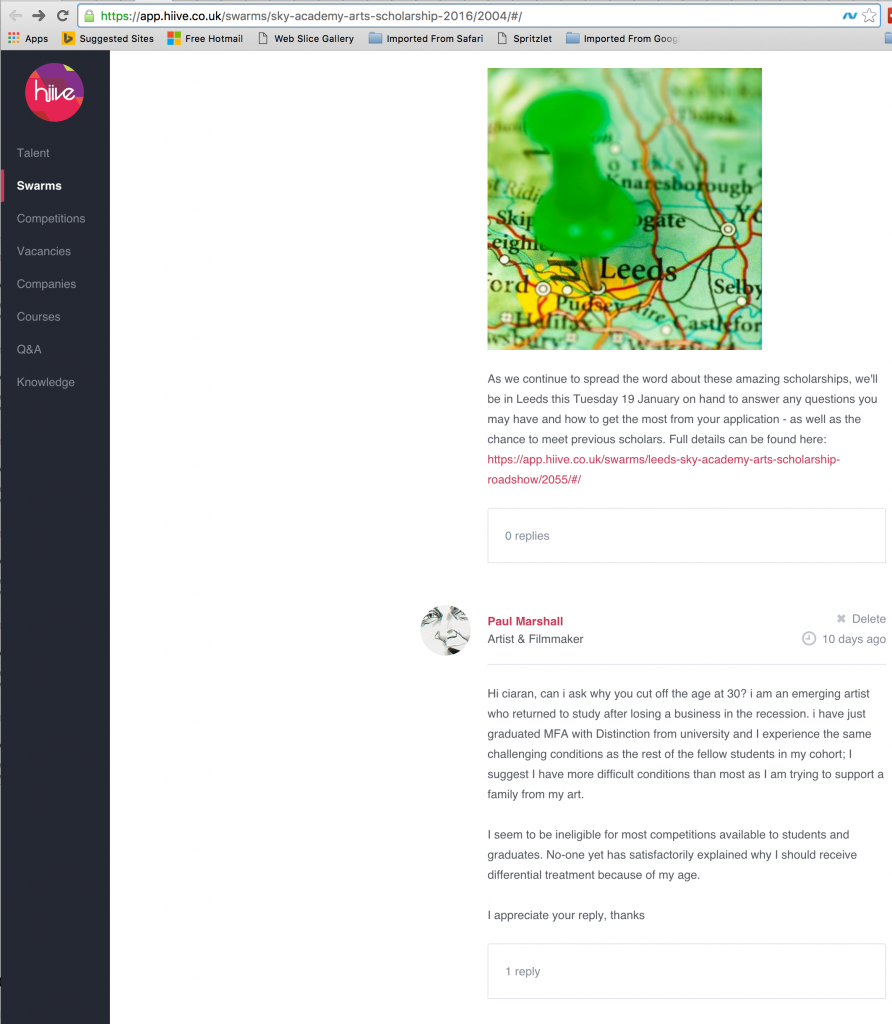 Not working for me

Turner Prize “age limit of 50 … not a ‘lifetime achievement’ award.
Saatchi “emerging artists from the UK and Ukraine who are between the ages of 18-35”
Future Generation Art Prize “international award for artists up to 35 years of age.”
NI Young Artist Of The Year “Must be aged 18-30”

Thank you to these organisations who are doing it correctly:

Ashurst Emerging Artist Prize “There are no restrictions based on age, training or nationality”
International Emerging Artist Award “18+” […] “There is no maximum age limit.”
DAZED “unrepresented artists of all disciplines not currently in education”

*I have always been an artist with a strong interest in sound and then Media. I was an administrator and IT manager in the 90s. In 1996 became a single dad and soon after I left my career to raise my children. My Art was a way to make ends meet in between school runs and laundry. I never had any formal training, I just followed my intuition. That intuition led me to a develop a public sound art item which was popular. Incoming commissions meant it developed into a replicable format, became a product and then a themed product range developed around that core product. A quick appearance on BBC Dragon’s Den in 2006 did me no favours but brought massive and well-resourced competition into play. A Limited Company was formed after 10 years, we were on the verge of signing a master franchise into the USA but all that was taken shortly after by austerity measures that were enforced on my primary client market. I worked on for 2 years ploughing every resource I had into it, but had to give up when continuing would have meant risking my home and health.

In many ways, this artist career is one that I have deferred for 20 years to raise a family. I tip my hat to career mums and single parents everywhere, your work is super underappreciated.